Why Is the car battery light on

See also
Why is dashboard oil light on
Check Engine
How to check the current leak in a car?
How to eliminate “whistle” of the alternator belt
Dashboard markings

Battery charging lamp lights on — it means that the alternator is not working or the car battery is out of order. This is the first thought of a car owner when he saw the battery icon on the dashboard. However, the reason why the charge indicator lights on may be much simpler. Most often the battery indicator signals a loose alternator belt or poor terminal contact (insufficient fastening or oxidation).

If the problem turns out to be in the alternator (how to determine this will be described below), in most cases it's because of a faulty diode bridge or voltage regulator. If the battery light is on when the engine is working, the first thing you should do is to check the voltage on the battery terminals with a multimeter, and after turning off the ignition to make sure that the terminals are secure and in good condition. The table below describes how to determine the cause of the malfunction.

Causes why the battery lamp is illuminated 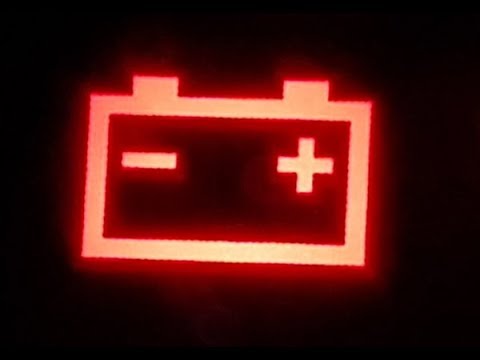 Causes why is the battery light on in my car may be as follows:

The drive belt is loose or has broken. This problem will be accompanied by other related problems (dim light, difficult starting, creaking or whistling under the hood).

Failure of voltage regulator relay. Since the task of this node is to limit the voltage transmitted from the generator to the battery at 14.4V, when it fails, voltage to the battery terminals does not come at all (if the belt is intact, then with other problems it may come, but be insufficient).

Diode bridge burned out (failure of at least one diode). The alternator can either not deliver any current at all, or generate too little. The drive belt is loose

Breakage of one of the phases of the alternator winding (circuit breakage). This usually occurs with contacts that are connected with a bolted connection. In particular, the bolt can unscrew over time and break the contact between one of the phases and the diode rectifier. Circuit failure is also possible if both power diodes in the rectifier unit fail. This can also be the case with alternators where the contacts are not bolted together, but soldered together. Pay attention that in this case the emergency lamp with battery on the dashboard will be glowing at half intensity. And when the engine revs are added, it will stop glowing.

Bad contact on the alternator. Despite the fact that the terminal connection, where the output wires of the alternator are connected, is mechanically protected (usually by a cap or similar device) often over time, the contacts can oxidize, dirt and/or oil can get on them. All of this leads to poor contact and reduced conductivity. The same reasoning applies to the ground contacts. If the «minus» is bad, the battery will not get a proper charge, and accordingly, the battery icon on the dashboard lights up.

The problem with the car battery Checking the battery with a multimeter

The battery icon on the dashboard lights on when the battery simply can't take a charge. The first reason for this — the age of the battery or its partial failure. As a variant — low level of electrolyte in it. The second reason — oxidation of the terminals and contacts to it or contamination of the surfaces.

To understand the problem with the alternator or battery, do some tests with a multimeter on the battery. Check the voltage across its terminals, and make sure it can hold a load (you can connect a 55 watt car light to the battery terminals and watch the voltage reading on the multimeter to see how fast it drops).

When the light bulb lights up at half current or even dimmer, and in a variety of situations, the problem is usually in the wiring. With fractures, damaged insulation starts to glow a little, even with a slight load on the battery.

Likewise, the battery light may be on at half load due to a bad contact on the voltage regulator. The bad contact may be due to corrosion or mechanical damage.

Diagnosing and fixing the problem

The first thing, what to do when the dashboard battery light comes on, is to check whether the battery is not getting a charge or the light is on but there is a charge.

In road conditions, when there is no multimeter at hand, it can be done according to the following algorithm… In the dark time of the day in case of operation of the car only from the battery with time it will be seen that the headlight, instrument illumination on the panel, as well as internal lights start to shine more dimly with time.

Another method of checking the alternator is as follows, which absolutely everyone can do:

For a more detailed check you will need a multimeter:

If when checking the voltage value on the battery is within the described limits, and the lamp is on, it means false triggering and it is necessary to perform diagnostics of the car electrical system.

If measurements showed that the voltage on the battery is about 12.6… 12.7 volts and drops, then indeed the battery is not charged and the lamp of the car battery is lit for a reason. In this case it is necessary to check all the connection terminals on the battery and the alternator, as well as perform its additional check.

Dave Wagner 25 April 2022
Repair of running gear, replacement of units, dense repair of auto air conditioning systems.
Ask a question
Is the article useful? Yes No
419
Thank you! Your vote counts.
Did you like the article? Sharing would be the best thanks
Facebook
Telegram
Twitter
Copy
Share:
See also
Can't find an answer to your question?
Ask in the comments. We will answer for sure!
Loading comments
Да Нет
✖