Why is dashboard oil light on

If the oil light on the dashboard lights up — it may indicate such problems as: low oil level in the crankcase, low pressure in the engine oil system (for example, clogged oil filter, bad oil pump), failed oil level sensor and some others, less common.

In any case, if the oil pressure light is on or blinking — it is necessary first of all to check the level of lubricating liquid. If its indicator is normal — look for the reason that caused such an indication and eliminate it. It is possible to determine the exact reason why oil light on after several checks or even only in service conditions.

When the oil light on the panel lights (oil lamp) — it is better to stop driving until you find out the reason, otherwise you can put the engine out of order.

What are the causes of the oil light on the dashboard

Not enough oil in the engine

The simplest problem is a critically low oil level. That's because not every driver checks the level regularly or follows the intervals for changing it. However to know what is the level of oil in the engine is also not enough. It can decrease because of natural consumption, engine wear, excessive carbonization or leakage (through gaskets or a crack in the crankcase).

This is signaled differently on different cars. The lamp with the image of a kettle and a drop of oil will be on, or it may be accompanied by the inscription on the digital panel, for example, "Check Engine Oil Level", «Engine Oil Pressure Low». A precursor of such a problem may be periodic flashing of the light when driving uphill or when driving down a steep incline. Engine oil has its own service life. It is regulated by the manufacturer from 9 000 to 18 000 miles, but under certain operating conditions it may reach only 6 — 8 thousand miles. But they often ignore it and drive until oil turns to jelly or on the contrary becomes very liquid. Sometimes in such a case besides an oil light in car there appear additional messages on the dashboard, for example, «Oil pressure Engine off», «Oil change, Service Engine Oil».

But it is not always like that, bad engine oil may be due to an engine trouble — fuel or antifreeze. It becomes liquid or on the contrary thick and clogs up the oil system!

When checking the level always look at the color of oil, its condition and smell — that will help to detect a problem in time!

If the oil light is on after changing the oil, then most likely the viscosity has been chosen incorrectly! Very viscous oil becomes too thick at low temperatures, and too thin in hot conditions — too thin. In both cases the pressure in the oil system is disrupted and that contributes to the red oil warning light on the dashboard.

The entire oil system depends on the condition of the oil filter. If it is heavily clogged with sludge, the pressure reducing valve does not work, the check valve does not hold, it creates additional load on the oil pump, the pressure is reduced and the oil ducts are clogged, the engine cylinder-piston system is worn.

In either case, the oil filter needs to be replaced. By the way, such situation may be due to the fact that it is simply forgotten to be changed at oil changes.

Oil sensor failure is due to their wear and tear. In this case the red or yellow oil indicator will always be on, regardless of the fact that checking the level with the dipstick and oil pressure gauge, showed the absence of the signaling problem. Also in this situation, in addition to the indicator, the panel may display an additional message, such as «Oil Sensor Workshop», «Oil Level Low».

If the oil pump is broken the system will not have the required oil pressure and depending on the pump type and nature of the problem the light may either blink or be on continuously. If this occurs, do not continue driving the vehicle, as it will cause engine wear and tear.

The pump screen is clogged

If the oil intake screen is clogged, less oil is getting to the pump than it should, resulting in less pressure in the system, less lubrication of the engine mechanisms and contributing to the oil pump wear.

This problem can occur if oil is changed infrequently or not at all. Sometimes drivers can only top up the oil in the engine when the engine is using a lot of it. Dirt that can clog the mesh is also the result of constant overheating or improper use of additives designed to clean the oil system.

Clogged oil ducts in an engine

Many modern engines are designed in such a way that the diameter of their oil ducts is rather small (for example, in VAG vehicles). Therefore, if the oil and oil filter are changed infrequently or if engine additives are used for cleaning purposes, particles of burned engine oil can clog the thin channels. This leads to a drop in oil pressure in the system and wear of the crank mechanism.

The cause of engine oil light illumination as a result of engine wear is relevant when using an old car, as well as in the case of non-compliance with the car maintenance recommendations or negligent operation of the car.

What do I do if my oil light comes on?

Keep in mind that whether or not to continue driving when the oil light comes on can only be determined by certain checks.

Operating the machine with a low oil level or a defective oil filter is highly undesirable. Because in such conditions, the engine experiences enormous mechanical and thermal overloads, which reduces its life and can partially and even completely destroy it. In this case, you need to refill the engine oil and replace the oil filter. Driving with a faulty oil pump and low pressure in the oil system is categorically forbidden!

Therefore first of all check the oil in the engine with the dipstick. It is necessary to find out the quantity and condition of the oil. Further specific actions will directly depend on the result of the check and the reasons for this situation.

If you need a refill, top up if possible, but most likely it is better to change oil with fresh one, and don't forget to change oil filter for new one at the same time, regardless of its condition. If you can't remember the date of the last oil change in the engine, it may already be very thick. You can see it by unscrewing the oil filler cap and shining a flashlight or removing the valve cover.

With a visible oil leakage from the engine, when it is seen dripping or oil drips are visible on the engine near the cylinder block or valves, it is also worth adding oil to the maximum mark. And then make an appointment at an auto shop to have the crankshaft gasket or oil seals replaced. When you checked the level and found out that the oil smells like fuel or emulsion appeared on the dipstick, adding oil will not help — you need repair.

If there are no traces of leakage, and the oil level is below the minimum level, it is most likely that the engine began to consume oil above the norm. Such consumption can occur as a result of combustion when oil rings on valves are leaking. This fact can be determined by bluish smoke from the exhaust and wet black soot on the spark plugs.

If the oil level is okay and it is possible to dismantle the oil pressure sensor, it is worth unscrewing it and checking with a multimeter and/or a pressure gauge. It is also possible that the wire on its terminal is broken. 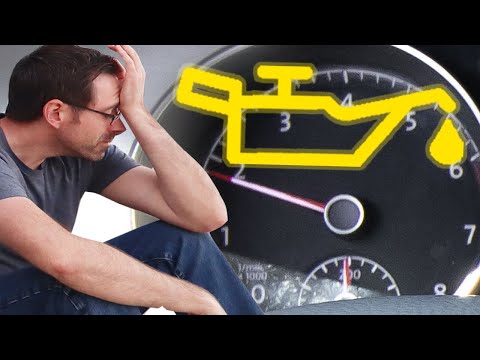 What to do When Your Oil Light Comes on

How long can you drive after the oil light comes on?

If there is no possibility to fill up oil even up to minimal level, then, as a last resort, with minimal loads, i.e. at medium speed and with low speed drive to a car store or service center, where you can fill (or completely change) engine oil. But keep in mind that if a store is far away, it's better to leave a car there and fill it up with oil later or call a tow truck.
If there is a serious problem with an active oil light, you can drive no more than 10 miles. If the problem is a natural drop in the oil level due to oil burning, you can drive a little longer, but more than 2 weeks or 500 miles.

Remember, the longer you drive a car with an oil light on, the more it will cost to repair the engine!

Adam Henri 17 May 2022
Car mechanic with 10 years of experience in repairing and servicing cars of different brands. Main area: diagnostics and mechanics.
Ask a question
Is the article useful? Yes No
1k
Thank you! Your vote counts.
Did you like the article? Sharing would be the best thanks
Facebook
Telegram
Twitter
Copy
Share:
See also
Can't find an answer to your question?
Ask in the comments. We will answer for sure!
Loading comments
Да Нет
✖