Car hard to start when engine is cold

In winter or during the cold season, many people find it challenging to start their cars. The reasons are different for all since the process of starting the engine is influenced by many factors. Such a problem can be if: a weak battery, bad fuel pump, non-working plugs or temperature sensor, or thick oil, but there are also a number of other faults.

If the starter motor starts well when you turn the key, look for a problem with the electronic sensors or the fuel system.

Causes of hard starting when the engine is cold

It is important to distinguish situations, why is my car hard to start when the engine is cold:

The causes should be considered separately for each case because the problems are different. All the reasons that lead to a bad cold start of an engine are considered in the table below:

There are even rarer problems, but no less important. We will also mention them below.

The first thing you should pay attention to when the injector car is working poorly is the sensors. Failure of some of them leads to difficulty starting the engine because the wrong signals are sent to the ECU unit. Usually, it is difficult to start in the cold because of: If everything is OK with the sensors, it is worth checking the following assemblies:

On cars such as Audi 80 (with mechanical injector), first of all, check the starter injector.

If the starter turns normally, plugs and wires are okay, then the search for the reason that bad starts in the cold injector, you need to start with a check of the coolant sensor and check the pressure in the fuel system (which holds, and how long), as these are the two most common problems.

Why a carbureted engine doesn't start well in the cold

Most of the reasons why a carburetor engine starts poorly in the cold, or does not start at all, is due to malfunctions of the ignition system elements such as: spark plugs, spark plug wires, coil or battery.

Therefore, the first thing to do is to unscrew the spark plugs — if they are wet, then the electrical system is to blame.

Quite often in carburetor engines there are also difficulties with starting when the jets are clogged.

The main reasons why the carburetor does not start in the cold: Of course, if before starting pump up the gasoline and pull out a bigger suction pump, it starts better.

But, all these tips are relevant when the carburetor is properly configured and there are no problems with the commutator or spark plugs.

When the cold engine carburetor engine does not start — you need to smoothly press the gas pedal to the stop, twist the starter and release the pedal back, as soon as it grabbed, keep the gas in the same position until warmed up.

Let's take a look at some typical cases of not starting in the cold:

If everything is normal with oil, plugs and wires, it is possible that the ignition is late or the starter valve in the carburetor is not adjusted. However, there may be a torn diaphragm in the cold start system, and the adjustment of the valves also says a lot.

Poor starting in the cold diesel (causes and tips for elimination)

As you know, starting a diesel engine is due to temperature and compression, so if there are no problems with the battery and starter, there may be 3 main ways to find the reason why the diesel does not start well in the morning in the cold:

Blue smoke from the diesel exhaust when the starter is turning means that the fuel supply to the cylinders is present, but the mixture does not ignite.

No less common case, when the owner of a car with a diesel engine can not start a cold engine, but a hot one starts without problems — if there is no glow on the candles. They carry out the heating of the diesel fuel until the diesel is completely at operating temperature.

There can be three options as to why the spark plugs do not work: To check the diesel glow plugs, you can choose several ways:

If the plugs are working, and they are properly powered when the ignition is turned on, in some cases it is necessary to check the valve gaps. After warming up, they come back to normal and the engine starts normally when hot. Defective diesel injectors, as a result of natural wear or contamination. In some cases, the injectors are dumping a lot of fuel into the return.

Fuel outages are much more troublesome to start the engine. So, if the diesel stops starting in the morning no matter what the temperature is, it's either the fuel going out (the valve on the return isn't holding) or it's sucking air, the other options are less likely! Air in the fuel system can cause the diesel to start badly and stall.

The fuel is not in season. When it's cold outside and the diesel engine won't start or immediately stalls after starting, then the problem may be the fuel. At temperatures below 0 Celsius, the summer grade of diesel fuel thickens in the fuel system. It is necessary to use diesel fuel according to the season. In such a case, heating the fuel system and changing the fuel filter will help to start the diesel.

If the diesel does not start well in the cold, the causes can be gathered in a single list of ten points: 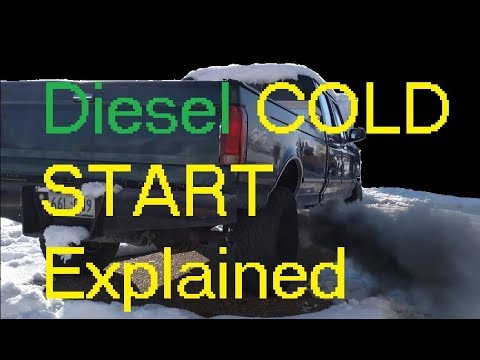 Why Diesel Engines Are Difficult to Cold Start: video

We hope, all the above will help you, and if not solve the problem with the cold start engine, then at least directs you to the right way of its elimination by your own efforts or with the help of a specialist.

How do you fix a cold start problem?

To overcome the difficult starting a cold engine can only eliminate the identified problem, but there are a few general tips that will help solve this problem.

On gasoline engines, the indicator that bad starts and stalls in the cold, can be a spark plug. Unscrew it, look: if poured — overflowing, look for the points further; if dry — lean mixture, also go through the options. This method of analysis will allow you to begin with the simpler findings and gradually approach the more complex causes of poor engine starting in the cold, and not look for them in the fuel pump, disassemble the injector, get into the mechanism of the timing, open the cylinder block, etc.

But the diesel engine will have poor compression first in the list of faults. So, the owners of diesel automobiles should pay heightened attention to it. The second place is occupied by the quality of fuel or its inappropriateness for the season, and the third place is the glow plugs.

Ask a question
Is the article useful? Yes No
408
Thank you! Your vote counts.
Did you like the article? Sharing would be the best thanks
Facebook
Telegram
Twitter
Copy
Share:
See also
Can't find an answer to your question?
Ask in the comments. We will answer for sure!
Loading comments
Да Нет
✖