How to Check a Crankshaft Position Sensor

See also
P0016 error of mismatch of the signals of the sensors of the crankshaft and camshaft. Causes and elimination

Every car owner is perfectly aware of importance of the car crankshaft position sensor (CKPS). Sometimes, due to the fact that using it you can synchronize operation of the electronic engine control unit, this apparatus is also called synchronization sensor. In the event of breakdowns in the described sensor, it is impossible to start the engine or there's a failure that can lead to a complete stop (reduction of power, failures in turns). Also, this sensor is responsible for synchronizing the fuel supply by turning the ignition key. We show only the main characteristic indicators of breakages of crankshaft position sensor, T-belt pulley or generator.

Initially, find out the way for its performance quality test and be absolutely sure that everything is in order. Why such a test is always necessary to carry out the first?

Everything is quite simple. Despite the fact that in most vehicles, this sensor is not located in the most convenient place, its serviceability test takes very little time and resources. But after this test you will be absolutely clear, if it is necessary to replace the sensor.

How do I test the crankshaft position sensor?

To check the functioning of the sensor (CKPS), you can follow several ways. For each option, you need to use certain devices. The most commonly three main approaches are used to verify the functionality of the crankshaft position sensor, let’s consider them.

Based on the advice of professionals, before checking, always remove the sensor with a marking its original location on the engine. It is clear that after removing you need to visually inspect the sensor. The results of visual inspection allow you to detect damage, to verify the state of the contact pad, the contact core. Remove contamination using alcohol or gasoline. The crankshaft position sensor contacts must be clean.

The dismantling process is necessary to set the distance from the sensor core to target wheel. It should range from 0.6 mm to 1.5 mm.

In the absence of any problems, you can move on to finding hidden issues in the wiring diagram of the device.

Crankshaft Sensor Diagnosis With an Ohmmeter

To measure the spinning resistance of the crankshaft sensor use an ohmmeter (multimeter). Properly functioning sensor will range from 550 to 750 ohms.

If you want to be sure, before starting work, please read your vehicle’s Repair Manual carefully. If the measured values do not meet the stated interval, it is necessary to replace the crankshaft sensor. 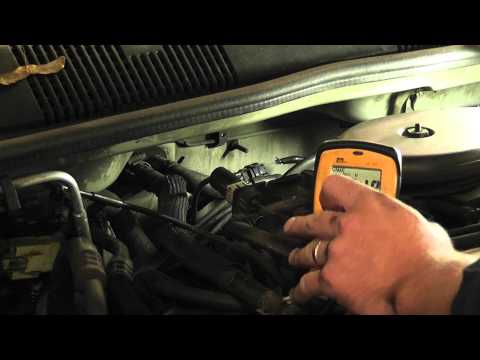 How to test a crank sensor with a voltmeter: video

The second approach to verify the CKPS functionality is more time consuming. To carry it out, you need to have more devices:

The ambient temperature is important for the correctness of the obtained results, preferably 20-22 °C. Wiring resistance should be measured by the ohmmeter, as mentioned above.

Next, measure the coil inductance with a special meter. In a normal sensor, it must be equal to 200-400 MHz.

Next, measure the insulation resistance using a megger. If the voltage is 500V, this parameter cannot exceed 20 MW.

In the event of accidental magnetization of the target wheel due to repair of the sensor, make the demagnetization using the mains transformer.

Analyzing all data and parameters derived from the measurement, you can make a conclusion about the performance of the crankshaft sensor, or it replacement.

Installing the old or replacing the device, carefully follow the marks left by you during dismantling, keep the distance of 0.5-1.5 mm from the core to the target wheel.

The third method of crankshaft sensor diagnosing is the most accurate and is used at professional stations. It requires the presence of an oscilloscope and programs. When using this method, you do not need to dismantle the device from the engine, because it allows you to see the formation of a signal. The digital oscilloscope allows professionals to effectively detect various problems in the injection system.

To obtain the correct parameters, connect black oscilloscope clip, called the «crocodile», to the engine of the vehicle, the probe is set parallel sensor signal output (sensor connector — terminal A). The second oscilloscope probe connector must be connected to an analog USB Autoscope II input number 5. This actions should be performed in order to see the scope patterns of the signal voltage at the crankshaft position sensor input.

Next, you must select the Inductive Crankshaft display mode. Now you can start the vehicle. If the engine cannot start, you need to turn the motor with starter. When there is a signal from the crankshaft position sensor, but its output parameters do not comply with the normal ones, there may be vehicle jerking, hard engine starting, failures, etc.

Such failures are an evidence of the sensor faults, or the target wheel and its clutch breakage. The problem correctness will become clear when considering the nature of the wave on the scope pattern, taken at the crankshaft position sensor outputs.

You have read the three possible ways of the crankshaft sensor test, such as:

Everyone chooses his own method according to his ability and knowledge. Be objective in the results obtained, as well as very careful and cautious when checking.

Dave Wagner 23 April 2022
Repair of running gear, replacement of units, dense repair of auto air conditioning systems.
Ask a question
Is the article useful? Yes No
4k
Thank you! Your vote counts.
Did you like the article? Sharing would be the best thanks
Facebook
Telegram
Twitter
Copy
Share:
See also
Can't find an answer to your question?
Ask in the comments. We will answer for sure!
Loading comments
Да Нет
✖