The innocuous white exhaust dissipates quickly and only appears when the engine is cold. Condensation deposited in the exhaust system will evaporate after it is warmed up. Thick white smoke with a sweet or sour odor is caused by coolant in the cylinders. Antifreeze heats up in the combustion chambers and escapes into the exhaust when the engine is started as a milky white exhaust.

White smoke is a sign of increased moisture in the exhaust system. After the engine warms up, the steam and condensation disappear, but if the smoke is still coming out of the exhaust, it is a sign of an engine malfunction. To find out why car smoking white and whether it is dangerous in further operation, you can literally use a napkin. Take a white cloth and after starting the engine for a couple of minutes, hold it near the exhaust pipe. If the smoke is due to ordinary moisture, it will be clean, if oil gets into the cylinders, there will be characteristic grease stains, and if antifreeze seeps in, the stains will be bluish or yellow, and with a sour smell.

And to find out the cause more accurately and understand what is worth doing, read the article in full. Crack in the cylinder head

Dense heavy smoke, indicating a problem in the engine, will go constantly if the problem is already extensive or only when pressing on the gas (acceleration) when there is a microcrack in the block. So if you see tubercles of thick white/gray smoke coming out of your car's exhaust, it could mean a leaky cylinder-head gasket or a crack in the block or the cylinder head. Both problems are very serious and need to be solved quickly.

A light or thin white smoke from the exhaust pipe during cold weather that soon disappears is water vapor, and is the norm. This is because condensation naturally accumulates in the exhaust system. It can form in the pipes of the exhaust system when the air temperature is below +10°C. So it should not be confused with smoke, which will show problems in the cooling system or the engine itself.

What does white smoke from the tailpipe indicate?

The presence of thick white smoke even after warming up, most often indicates the ingress of coolant into the engine cylinder. The place of fluid intrusion can be a burned gasket, or a flat spot under it, or a crack. 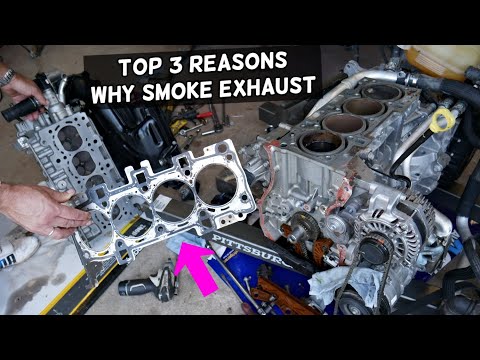 Most of the problems that cause white smoke from the tailpipe are due to engine overheating or improper fuel ignition. By paying attention to the hue, its smell and the overall behavior of the car, you can accurately determine the cause of the smoke's origin. The most common ones are:

Why white smoke comes out of the diesel exhaust pipe

After the engine has reached operating temperature, in addition to the presence of coolant in the cylinders, for a diesel car white smoke from the exhaust can indicate:

In vehicles with FAP/DPF particulate filter, white smoke from the muffler may appear during combustion of soot particles.

How to understand why white smoke appears?

In order to diagnose the specific cause, it is necessary to perform a few simple actions: A whitish grayish exhaust when warming up can indicate untimely ignition of the mixture. This color of smoke indicates that the gases that were supposed to push the piston in the cylinder ended up in the exhaust pipe. This kind of smoke, just as with moisture evaporation, goes away after warming up if there is nothing wrong with the ignition of the car.

Pay attention that if the gasket is punctured, the engine will not only smoke, but also the engine thrashing will appear. If the symptoms are only smoke and/or exhaust in the antifreeze tank, it is most likely a crack in the block.

Take note that the amount and color of smoke or vapor from the exhaust depends on the following factors:

Usually the amount of smoke is greater in wet weather, so variations in color and impurities are easier to spot under those conditions. This information will allow you to identify and determine the problem whether the exhaust smoke is white, blue or black.

How do you know if fluid is entering the engine cylinders?

To check if white smoke is coming from coolant entering the engine cylinders from the cooling system, you can do this: Oil film in the radiator

It can happen that you do not smell exhaust in the radiator or expansion tank, the pressure in it does not rise sharply, but there is white smoke, emulsion instead of oil, and the fluid level is dropping rapidly. This indicates that fluid is entering the cylinders through the intake system. To determine the cause of water in the cylinders, simply inspect the intake manifold without removing the cylinder head.

Can I drive the car when the antifreeze gets into the cylinders or mixes with the oil?

If you notice signs of antifreeze getting into the cylinders, further operation of the faulty engine is not recommended! Due to the reduction of lubricating properties of oil, which is gradually mixed with the coolant, there is rapid wear of engine parts. Also the operation of such a car may cause a water hammer, because the liquid may accumulate in the space above the piston.

How do I fix white smoke from exhaust?

The only way to get rid of the thick dense white smoke is to replace the gasket (cylinder head) or completely repair the engine. It is necessary to remove the cylinder head and replace the gasket if it is damaged. If there is a crack in the engine, most likely you will be recommended to change the engine, as it is not always possible to seal the crack. Everything will depend on its place of occurrence. Quite often with such a problem, it is cheaper to buy a new car than to repair the engine.

Dave Wagner 23 May 2022
Repair of running gear, replacement of units, dense repair of auto air conditioning systems.
Ask a question
Is the article useful? Yes No
473
Thank you! Your vote counts.
Did you like the article? Sharing would be the best thanks
Facebook
Telegram
Twitter
Copy
Share:
See also
Can't find an answer to your question?
Ask in the comments. We will answer for sure!
Loading comments
Да Нет
✖