Signs of a blown head gasket

A blown head gasket leads to such unpleasant consequences as engine overheating, poor heater performance, exhaust fumes from under the hood of the car, emulsion in the engine oil, white smoke from the exhaust pipe and some others. If you experience the above symptoms or one of them, it is necessary to check the cylinder head gasket. There are several ways to do this.

Below we will look at why the cylinder-head gasket blows, what consequences it leads to, and what to do if this trouble happened to the engine of your car.

Signs of a damaged cylinder-head gasket

If the cylinder head gasket is damaged, the sealing function will be impaired. Exhaust gases, engine oil and coolant may begin to mix with each other or burst out from under the head. Consequently, when the cylinder-head gasket is blown, the car owner will be prompted by the following signs: 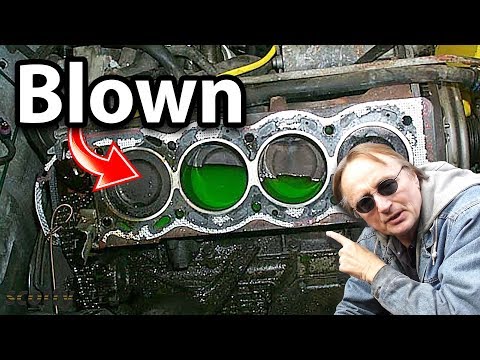 Emulsion from under the expansion tank cap Foam in the expansion tank

As a result of the mixing of antifreeze and oil, an emulsion of yellowish (most often) color is formed. If it appears, replacement of the cylinder-head gasket alone will not do the job. It is necessary to flush the system from this composition. Including a pallet and oil channels. And it may cost you additional expenses, sometimes comparable to a complete engine overhaul. A clear sign of engine overheating is the presence of condensation on its surface. This is also an indirect sign of a burned cylinder-head gasket or a crack in the cylinder block. First of all, it is necessary to make a computer diagnostics of the engine. The presence of errors will indicate the direction and possible additional faults. As a rule, these errors are related to problems in the ignition system.

Why the cylinder-head gasket blows

In most cases, the cause of problems with the head gasket is the banal overheating. Because of it, the cylinder-head cover can «twist», and the plane, by which the gasket is adjacent to the two contacting surfaces, is disturbed. As a consequence, there is a depressurization of the internal cavity with all the ensuing consequences. Aluminum heads mainly change their geometry. Cast iron heads are not subject to such malfunctions, they are more likely to give a crack than the warp, and even then in the most extreme cases.

Also due to overheating, the gasket can be heated to such temperatures that it will change its geometry. Naturally, in this case, depressurization will also occur. This is especially true for iron-asbestos gaskets.

Another reason is the violation of the tightening torque of the bolts. Both very high and low torque values have a detrimental effect. In the first case, the gasket can be destroyed, especially if it is made of low-quality materials. And in the second — to let the exhaust gases to the outside, without preventing them. In this case, the gases together with the atmospheric air will have a detrimental effect on the gasket material, gradually putting it out of service. Ideally, the bolts should be tightened using a torque gauge, and the tightening sequence should be followed. Reference information on this can be found in the manual.

According to statistics, 40% of all cases in which the gasket has failed, were caused by incorrect tightening torques or failure to follow the tightening sequence. In half of the cases, the gasket burned out due to engine overheating. Otherwise, it simply reached the end of its service life.

Also, sometimes the cause of the gasket is a problem with the combustion process (detonation, glow ignition). Because of overheating the cylinder head suffers a lot. Cracks can appear in it, which will also lead to depressurization of the described systems. The head is usually made of aluminum. And in the process of heating, it expands faster than the steel bolts. Therefore, the head starts to put a lot of pressure on the gasket, and the gasket is overloaded. This causes the gasket materials to harden, which in turn causes depressurization.

Often when the gasket fails, it burns through the rim or between the cylinders. This often results in erosion of the cylinder block surface and the bezel itself near the damage. Discoloration of the gasket material near the trim can also indicate high temperatures in the combustion chamber.

How to diagnose a cylinder head gasket leak

You can use one of several methods to tell if a cylinder-head gasket is leaking. To check the integrity of the head gasket, do one of the following: 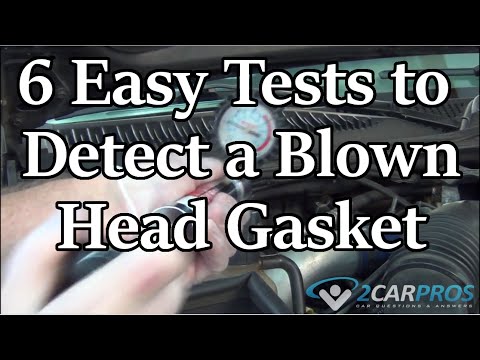 How to check for a blown head gasket: video

There are two simplest and most effective ways, which will be suitable for diagnosing the fault when the exhaust gases break into the cooling system.

Checking the integrity of the gasket with a condom Checking the integrity of the gasket with a condom

One of the effective and popular methods of checking is the method of using a balloon or condom. It is placed on the neck of the expansion tank by first unscrewing the cap. The main thing is to make sure that the condom sits tightly on the neck (you can use a bag or a balloon instead of a condom, but the diameter of the condom is usually perfect for the tank neck).

After you put it on the tank, you need to start the engine and let it run for a few minutes at 3,000 to 5,000 rpm. Depending on the level of depressurization, the condom will fill with gas quickly or slowly. It depends on the specific situation. In any case, if it started filling with exhaust gas, it means that the head gasket has been blown.

Checking the gasket with a bottle Checking the gasket with a bottle

Another method to determine whether the cylinder-head gasket is blown, is often used on trucks. It is enough to have a small bottle of water (e.g. 0.5 liters). As a rule, the expansion tanks have a breather tube (a tube, by means of which the same pressure is maintained as the atmospheric pressure in a closed container).

Can I drive with a blown cylinder-head gasket? — It is possible, but undesirable, and only for short distances, in particular, to the garage or service center for repairs. Otherwise, the consequence of such a malfunction may be an engine repair.

How to Fix a Head Gasket Leak in Your Car

If you find out after a diagnosis that the gasket is leaking, there is nothing you can do about it except replace it. It is also worth inspecting the surrounding surfaces, and most importantly, try to find out the true cause of the blowout.

The price of the gasket may be different and depends on the car brand and the manufacturer of the part itself. However, in comparison with other assemblies, it is not high. Repair work may cost you somewhat more than simply buying a gasket. The cost of fixing the problem will depend on several things: 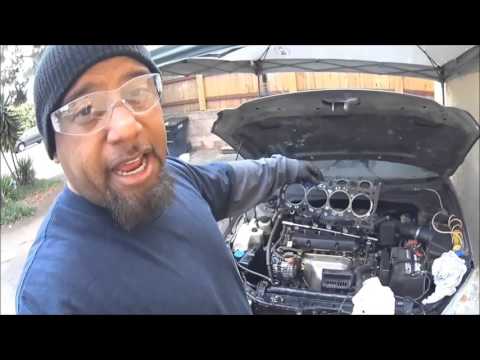 Checking a blown head gasket with no specialized tools: video

Before replacing the gasket yourself, it is necessary to clean the head of fouling, scale, and pieces of the old gasket. Next, it is necessary to inspect its surface. A special measuring tool is used for this, usually a ruler. It is spent on the surface, revealing the presence of gaps. The size of gaps should not be more than 0,5… 1 mm. Otherwise, the head surface should be grinded or completely replaced with a new one.

When replacing the gasket it is recommended to grease its surface with graphite grease. This will make it softer and easier for it to «find its» place on the head surface. It also makes it easier to remove when removing the gasket. The advantage of graphite grease, in this case, is that the graphite is not squeezed out during operation, turning into ash.

After the repair work, the car owner should monitor the behavior of the motor. Whether the above-mentioned malfunctions (white smoke from the exhaust pipe, emulsion or fat stains in the coolant, oil on the joint between the cylinder head and the cylinder-head, no engine overheating and so on) do not occur again. And immediately after replacement, do not operate the engine at maximum power. It is better to let the gasket «settle» and take its place.

Dave Wagner 23 May 2022
Repair of running gear, replacement of units, dense repair of auto air conditioning systems.
Ask a question
Is the article useful? Yes No
344
Thank you! Your vote counts.
Did you like the article? Sharing would be the best thanks
Facebook
Telegram
Twitter
Copy
Share:
See also
Can't find an answer to your question?
Ask in the comments. We will answer for sure!
Loading comments
Да Нет
✖