Knocking sound when moving off

Some car malfunctions are most apparent when starting off, when the damaged components are under increased strain. Knocking sound when moving off most often indicates critical wear of suspension or transmission elements, as well as trivial loose fasteners.

About what can be the source of extraneous sounds in the front and rear when starting off, what problems usually occur in specific models and whether it is possible to drive if there is a knock when starting abruptly, we will tell in this article.

Causes of a knock when starting a car

At the beginning of movement, the clutch, gearbox, transmission drives, working elements of the suspension, joints and supports are exposed to increased loads. As parts wear, they become excessively loose and come into contact with the mating parts.

Insufficient wear is the main reason why a knock is heard when starting off, but not all the time. In some cases, the symptom may also occur during sudden braking and stopping, when similar loads in the opposite direction occur.

Not detected in time, the cause of knocking at startup can develop into more serious problems and even pose a danger in the continuation of operation. Thus, failure of steering mechanism and brake system elements is fraught with sudden loss of control. Below we will consider in detail, why there is a knock when moving the car, all causes of its occurrence we will analyze in details, and also we will list options of their diagnostics.

Front end knocking when moving off

Front end knocking when moving off is most often caused by worn rubber-metal joints (engine or transmission mounts and silent blocks), steering components, and suspension mounts. Sometimes it may be caused by more exotic failure, such as severe wheel imbalance. If a number of parts fail or the fasteners become loose, the knock when moving away occurs at the front, rear, or on both sides simultaneously, depending on where the faulty unit is located. 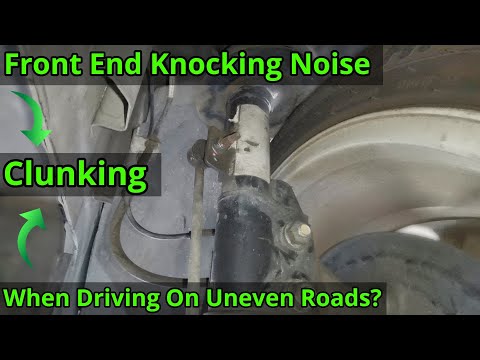 The main causes of knocking in the front of the car when starting:

What can knock when moving off in the box or transmission?

A knocking noise in an automatic transmission can be caused by overheating, low oil level, or use of the wrong fluid. This causes the friction clutches to malfunction and the gears to engage too hard. If after changing the oil in this case, the problem does not go away.

Sometimes similar symptoms are observed with different malfunctions. For example, a knock when moving backward can be a consequence of wear of the drives, rear engine cushion or gearbox. If the place of occurrence of an extraneous sound is not clearly traced — you need to carefully inspect the entire running gear and transmission.

Is it possible to drive a car that knocks when moving off?

Since the single knock on startup can be a consequence of different causes, the possible consequences of ignoring the problem are also different. The nature of the sound also matters. If you hear a knock when starting off sharply, but there is no knock during a smooth startup, most likely, the wear of the part is minimal and an urgent repair is not required. When the sound is distinct and constant — you must promptly look for and eliminate the cause.

If the knocking is caused by defects of steering, brakes, ball bearings or wheel brackets, it is dangerous to continue using the vehicle, because the car may become uncontrollable and cause an accident!

In the table below, the causes of single knocking when starting off are sorted into groups according to the risk of consequences of operating the vehicle with faults in the respective components.

Weaknesses that often knock when starting on popular cars

Some car models have design features and flaws that often cause knocking when starting off. The most likely causes of knocking at startup on popular cars are collected in the table.

Dave Wagner 26 May 2022
Repair of running gear, replacement of units, dense repair of auto air conditioning systems.
Ask a question
Is the article useful? Yes No
3k
Thank you! Your vote counts.
Did you like the article? Sharing would be the best thanks
Facebook
Telegram
Twitter
Copy
Share:
See also
Can't find an answer to your question?
Ask in the comments. We will answer for sure!
Loading comments
Да Нет
✖