Why radiator fan stays on all the time

Additional radiator cooling should be activated only when the engine temperature reaches 90°C. If the cooling fan constantly runs, it indicates one of these reasons: failure of the coolant temperature sensor or its wiring, fan start relay failure, damage to the drive motor wires, failure of the electronic engine control unit (ECU) and several others. To understand how the cooling fan should work properly, you need to know what temperature is programmed in the control unit for its inclusion. Or look at the data on the fan switch sensor located in the radiator. Usually, it is in the range of +87...+95 °C.

In this article, we will consider in detail all the main reasons why the engine cooling fan does not work only when the coolant temperature reaches 100 degrees, but always when the ignition is off.

Why the cooling fan is constantly running

There are 7 main reasons why the vehicle's engine fan is running all the time. How to determine which of them occurred in your case, read below.

Failure of a coolant temperature sensor or damage of its wiring

If there is incorrect information from the sensor to ECU (over- or under-information, lack of signal, short circuit), "Check Engine" light turns on, and ECU memory generates errors. As a result of such a malfunction, the engine goes to the emergency operation mode, in which the fan turns continuously, so as not to overheat the engine.

How to understand it: A sign of such malfunction is difficult to start a cold engine.

Quite often the fan constantly runs if it has a frayed minus wire. Depending on the design of the engine, this can be in different places.

How to determine this: If the design of the motor provides for two coolant temperature sensors, then if the «minus» of the first sensor is broken, the fan will «flail» when the ignition is on. If the insulation of the wires of the second sensor is damaged, the fan runs continuously when the engine is on.

Defective relay on the fan

In most cars, the fan power consists of a «plus» from the relay and a «minus» from the ECU by temperature from the coolant temperature sensor. «Plus» is supplied all the time, and «minus» when the antifreeze reaches operating temperature.

How to determine it: You may hear the problem in the relay by a «click». If the fan is running even though the engine is still cold, and there was no clicking sound of the fan relay, it means it is closed. Or the minus wire of the sensor was short-circuited. If the radiator, both the main radiator and the air conditioner radiator, is very dirty, the heat exchange is disturbed because of which the fan has to spin almost constantly to cool the system.

How to define: The fan runs constantly when the air conditioner is on, and if it wasn't on, it will start spinning as soon as the engine warms up and won't shut off even after the engine is turned off until the motor cools down. Contamination can be both outside and inside (if the antifreeze hasn't been changed for a long time).

The condition on the outside will help to see a flashlight and to determine whether contamination may be present on the inside, you can use certain symptoms. Some of them are the condition of the coolant and the operation of the cabin heater.

Failure of the freon pressure sensor in the air conditioner

If the freon pressure sensor fails and the refrigerant leaks, the ECU gets a signal that the radiator is overheated. As a result, it tries to cool it with the fan permanently on.

How to identify it: The cooling fan rotates constantly when you switch on the air conditioner. It really shouldn't be this way, as it indicates either a clogged (dirty) radiator or a problem with the freon pressure sensor (freon leak).

Low efficiency of the cooling system

How to determine the problem: With this problem, the fan may not run continuously, and for a long time, or just turn on frequently.

The ECU may malfunction due to a defect in its software or if moisture enters its interior. As moisture can be for example antifreeze, which got into ECU (it is often actual for Chevrolet Cruze, antifreeze gets into ECU through torn throttle heating pipe, so it is near block). 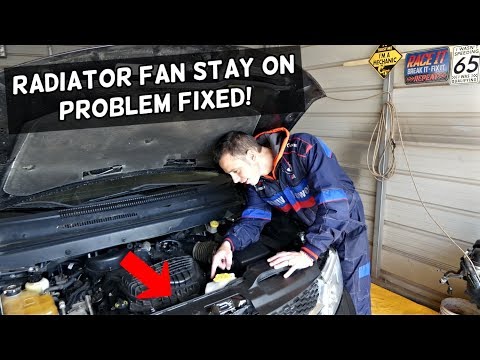 Why radiator fan stays on all the time

What to do if the cooling fan is constantly running

To diagnose the reason why the engine cooling fan is running all the time, you need to perform several checks based on the most probable causes.

If everything is checked but the problem remains, there is only one last measure left — ECU diagnosis. In a general case, it is necessary to dismantle the ECU and disassemble its case. Then check the condition of the internal board and its elements. If necessary, clean oxides with alcohol. But such work should be entrusted only to specialists at a service station.

In summer it is undesirable to drive with constantly switched on fan, but it is acceptable. However, if the fan is constantly spinning in winter, it is recommended to diagnose and repair the failure as soon as possible.

Most often, the radiator cooling fan is running all the time because of a short circuit in the starting relay or its wiring. Other problems are less frequent. Accordingly, it is necessary to start diagnostics by checking relay, wiring and presence of errors in ECU memory.

Adam Henri 30 May 2022
Car mechanic with 10 years of experience in repairing and servicing cars of different brands. Main area: diagnostics and mechanics.
Ask a question
Is the article useful? Yes No
2k
Thank you! Your vote counts.
Did you like the article? Sharing would be the best thanks
Facebook
Telegram
Twitter
Copy
Share:
See also
Can't find an answer to your question?
Ask in the comments. We will answer for sure!
Loading comments
Да Нет
✖